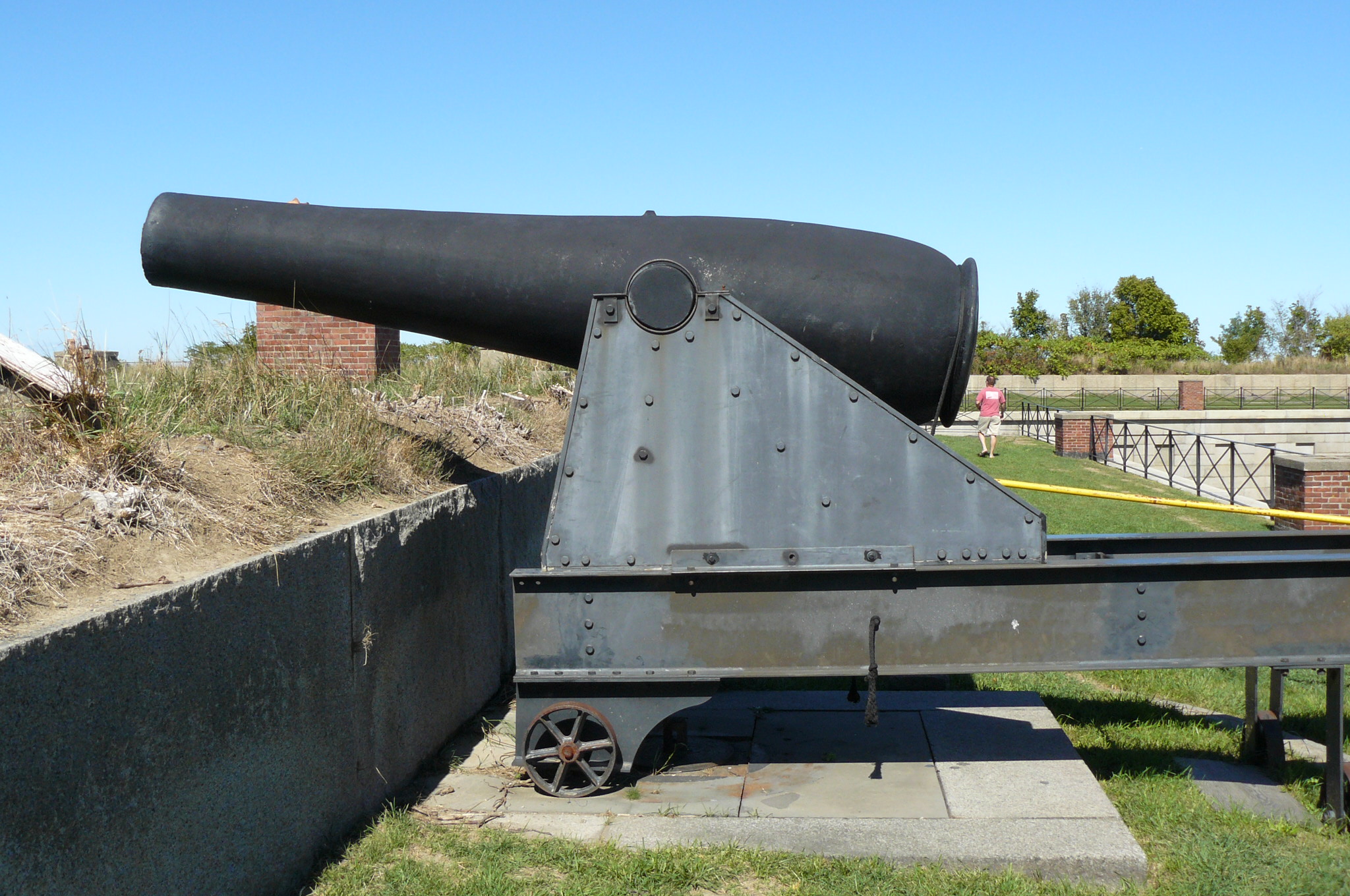 Finely Executed Pen and Ink Drawing of 15” Rodman Gun at Ft. Warren – This excellently drawn depiction of a 15” Rodman gun at Ft. Warren is in overall very good condition. It has one visible, very minor tear, which is barely noticeable. The drawing, seemingly completed by a trained artillery officer, knowledgeable in the specifics of this type of weapon, is most very impressive in its depth of detail and exactitude; it most certainly is a scale drawing. The drawing has been archivally framed, in a fine, walnut and gilded, mid-19th century frame, with UV repellant glass. The drawing measures as follows: Frame – 25″ x 21″; sight – 15.5″ x 11.25″.

The Columbiad was a large-caliber, smoothbore, muzzle-loading cannon able to fire heavy projectiles at both high and low trajectories. This feature enabled the columbiad to fire solid shot or shell to long ranges, making it an excellent seacoast defense weapon for its day.Invented by Colonel George Bomford, United States Army, in 1811, columbiads were used by the United States coastal artillery from the War of 1812 until the early years of the 20th Century. Very few columbiads were used outside of the U.S. and Confederate Armies; nevertheless, the columbiad is considered by some as the inspiration for the later shell-only cannons developed by Frenchman Henri-Joseph Paixhans some 30 years later.

The first columbiads produced in 1811 possessed a 7.25-inch (184 mm) diameter bore and took a fifty-pound projectile. Although some Second System forts were armed with this weapon, the Army did not widely adopt early columbiads due to initial high costs of manufacture. Only after 1844 did an eight-inch (203 mm) model and a ten-inch (254 mm) model see mass production. The eight-inch (203 mm) columbiad could project a 65-pound shell 4,400 yards (4,000 m) or 4,800 yards (4,400 m) for solid shot; the model weighed 9240 pounds. The ten-inch (254 mm) columbiad weighed 15,400 pounds and hefted a 128-pound shell to 4,800 yards (4,400 m) or solid shot to 5,600 yards (5,100 m). These cast iron weapons were typically mounted on seacoast carriages designed to recoil up a slightly inclined set of “rails” or wooden beams. The mounted columbiad could pivot left or right on a traversing rail. In most cases the arc of pivot was less than 180 degrees, but some batteries allowed 360-degree traverse.

Just prior to the American Civil War, Ordnance Corps officer Thomas Jackson Rodman developed an improved version of the columbiad, which became known by his name. Specifically the Rodman gun was designed to reduce cracking and other weaknesses found in such large iron castings. The process involved ensured the iron cooled evenly from the inside out, and resulted in what we might call today a “soda bottle” shaped casting with smooth, tapered exterior. The “Rodman” process also allowed the manufacture of much larger bore columbiads.

Between 1858 and the end of the Civil War, Northern foundries produced eight-inch (203 mm), ten-inch (254 mm), fifteen-inch (381 mm) and twenty-inch Rodman style columbiads. The smaller bore columbiads shared similar range factors to the older weapons, but the fifteen-inch (381 mm) models weighed over 25 tons and could fire 400-pound projectiles out to 5,000 yards (4,600 m). The monster twenty-inch model weighed over 60 tons but could range to over 5 miles (8.0 km). Very few of the largest types were built, and none were fired in anger during the war.

The Confederate States also used columbiads extensively, mostly stocks captured from Federal arsenals at the time of secession. These acquitted themselves well against early ironclad warships. In addition, the Confederates produced limited quantities of eight-inch (203 mm) and ten-inch (254 mm) columbiads without the Rodman process; these could not withstand sustained use. The Confederates also rifled some columbiads in an effort to improve weapon performance.

Fort Warren was built from 1833 to 1861 and was completed shortly after the beginning of the American Civil War. The Army engineer in charge during the bulk of the fort’s construction was Colonel Sylvanus Thayer best known for his tenure as Superintendent of the United States Military Academy at West Point, New York. During the Civil War, the island fort served as a prison for captured Confederate army and navy personnel,[2] elected civil officials from the state of Maryland, as well as Northern political prisoners.

James M. Mason and John Slidell, the Confederate diplomats seized in the Trent affair, were among those held at the fort. Military officers held at Fort Warren include Richard S. Ewell, Isaac R. Trimble, John Gregg, Adam “Stovepipe” Johnson, Simon Bolivar Buckner, Sr., and Lloyd Tilghman. High ranking civilians held at Fort Warren include Confederate Vice President Alexander H. Stephens, and Confederate Postmaster General John Henninger Reagan. The prison camp had a reputation for humane treatment of its detainees. When the camp commander’s son, Lieutenant Justin E. Dimick, left Fort Warren for active duty in the field with the Second U.S. Artillery, he was given a letter from Confederate officers in the camp urging good care should he be captured. (He was later mortally wounded at Chancellorsville in May, 1863.)

The famous Union marching song John Brown was written at the fort using a tune from an old Methodist camp song. The song was carried to the Army of the Potomac by the men of the “Webster Regiment” (12th Massachusetts Infantry) who had mustered in at Fort Warren. Julia Ward Howe heard this song while visiting Washington DC. At the suggestion of her minister, Howe was encouraged to write new words. The Battle Hymn of the Republic, which was initially published as a poem, was later matched with the melody of the “John Brown” song and became one of the best remembered songs of the Civil War era.